This was one of the first times I realized how FUN this whole #PokemonGo thing is.

My kids asked Daddy not to move because there was a Pokemon on his HAT!!! It was on his hat. Ok, that’s kinda cool. 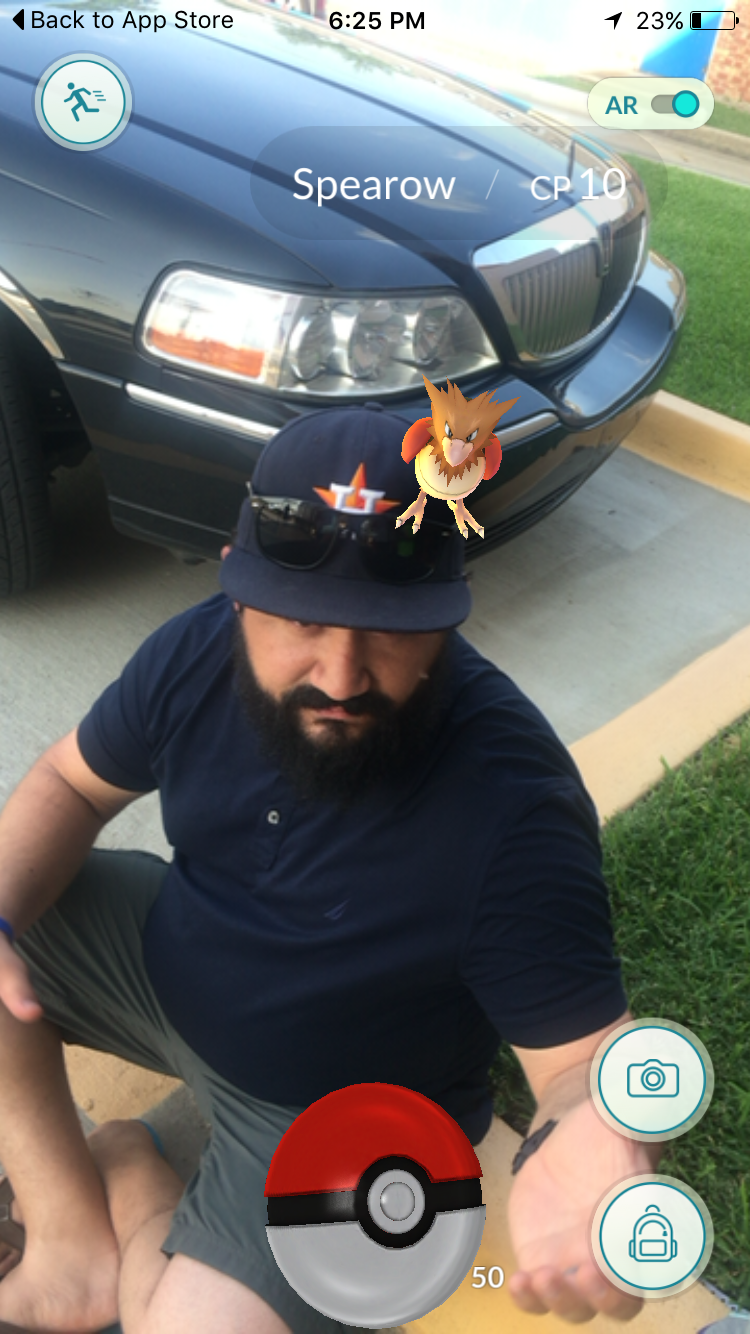 After my boot camp trainer Logan announced that he had become a Pokemon trainer (he still trains people, too!), and my hubby Adam started catching Pokemon all around me (how did Krabby get into our car???) and my kids kept asking me to go catch Pokemon with them, I caved.

And I LOVED IT!

Dude! Seriously! I didn’t even care about Pokemon when I was little. My brother who is 10 years younger was all about it, but I was the older sister who was like Candace in Phineas and Ferb … I was IN CHARGE! CONDITIONALLY! I didn’t do childish things like whatever you did with Pokemon thingys.

So what the heck made me care about them now???

For one thing, my kids got so dang excited about the fact that DADDY was catching Pokemon!!! I wanted to try to be as cool as Daddy. 🙂

For another, it seems like THE WORLD is playing #PokemonGo, so I figured I might as well figure out what all the fuss is about.

And honestly, as a cartoon-loving adult (life-long fan of pretty much all Disney animation, Looney Tunes, Flintstones and so many others), seeing a favorite character come to life in such a cool, fun, interactive way really intrigued me.

Guys … PokemonGo is SO FUN! I get why it’s such a craze. What I don’t get is how this whole thing got dangerous.

The handful of times we’ve played it on my phone or Daddy’s, we’ve been looking around, careful where we walk, watching for traffic … and now that I think of it … I don’t remember having to worry about traffic because we were not catching Pokemon anywhere NEAR traffic! Who would do that????

My apologies if that’s been you.

But seriously, I doubt that we’re the only family with common sense left. I wouldn’t even give myself the “common sense of the year award.” I’m a regular mom with a TON of flaws and failures. I lose my temper and need to feed my kids healthier foods. I am NOT the queen of common sense all the time.

But when it comes to PokemonGo … it baffles me that some people would not look where the heck they’re going!!! What in the world????

And I wouldn’t let my kids wander off on their own with a device, unsupervised.

As long as it’s a family activity with everyone’s common sense button turned on, I say Go #PokemonGo! Maybe I’ll see you at a trainer meeting one of these days. 😉